Like a ripple in a lake, it moves outward on and on until it reaches the shore. To end? Certainly not! That ripple splashes ashore, alters what it touches and itself, never to be the same again. So too, the Salmon Speaks project moved outward, transforming itself and everyone it touched.
In 2009, that tiny ripple started at Valhalla Children’s Center, which serves children 2 ½ to 5 years old in the Slocan Valley of British Columbia. We were reading stories about different kinds of fish: swordfish, deep-sea anglers, flying fish, guppies, and salmon. I asked the children to share their favourite story and the answer was, “salmon.” Why did they connect with the story of the salmon? Because of what salmon have to do to try to get home. “Home” meant so much to all of the children but, in our river system, the salmon can’t get home because of the dams. When a child insisted that the salmon needed to get past one of the biggest dams in North America and come home, other children’s voices joined in. It was clear that their sincere wish to do something needed to be honoured. They wanted to tell people that the salmon needed to come home and so they should.

Exercising Their Right to Speak Up

These children wanted to speak for themselves. How was I going to support them? Would other children feel the same if they heard the story of the salmon? I decided to share the salmon’s story with children at Wee Ones, a program in another Slocan Valley community, to see if they would have a similar response. They responded with profound empathy for the salmon that could not get past the dam and immediately began thinking of ways to help. Oh my! Their words, their feelings, their ideas to help! All they needed now were resources, and thus the Salmon Speaks project was born.
Complete with a logo, business cards, and a message, the children began to share THEIR message with THEIR passion throughout their communities. As time moved forward and other children added their voices, Salmon Speaks rippled outward through their province and into Washington State. We visited Grand Coulee Dam and made a lasting impression on the people there as “the children from Canada who came to protest the loss of the salmon.” We shared our story and sang our “Salmon Song” at a pipeline protest attended by environmentalists, first nations, and interested people from across the province. They too wanted the salmon’s return. We met Rick Hansen, a world-renowned activist for people with disabilities, and learned about his work to protect the sturgeon. We shared our story and our project. But with the dams still there, how could we claim victory?

Though the dams remain in place, we’ve found success in recognizing our own growth through this transformative experience. We now feel stronger, more resilient, and more knowledgeable than before we began this journey with the children. We find comfort in a community of individuals who share our concerns and our hopes and see numerous possibilities for continuing the work the children started. The first children involved in this project have gone on with their lives, but they’re more confident in sharing their perspectives and they continue to stand up for others. The project itself has been a powerful influence on the programming of both Wee Ones and Valhalla Children’s centers. We share the Salmon Speaks story with children year after year, along with stories about others who have tried to make things better for our world.

The project also lives on through our lessons about salmon in the Kootenays and Slocan Valley river system, once teeming with salmon, now transformed by dams. Every year, we travel up the Kootenay Lake to witness the landlocked Kokanee salmon spawning. Together, we learn and experience how one fish can have such a big impact on people, animals, and the environment. Every year, the children take part in releasing sturgeon into the Columbia River, another fish impacted by the dam system. They hold the fish, feel their wiggling in their hands, and wish them a happy, long life as the sturgeon swim away and out of sight. Through these experiences, they build connections to the salmon and the sturgeon.

Children have ideas of their own about how to make things better, and it’s vital that adults recognize and support these ideas. I remember listening to the children’s plans to help the salmon years ago and, amazingly, year after year, their ideas are still so similar. More amazing still is that their ideas, discussions, and sketches from the project are similar to solutions being proposed by adults to bring back salmon to the Columbia River system. Lifting the fish up to the top by an “elevator” lift system? This method is already being used in parts of the world. Fish travelling through pipes up and over the dams? Yes, this “whoosh” technology sucks up the fish and releases them over the top of the dam, like a vacuum cleaner hose. Children are amazing and we as adults need to listen to them much, much more than we do.

What will happen in the future? We still hope to share our salmon story with others. More and more people are understanding the value of having salmon back in our river system and working towards that goal. As Henry Stensgard told us, “go to the river, clap those rocks together, sing and call to the salmon. The more children that come, the louder the sound, those salmon will hear. The dams will fall and they will come.”

Learning How to Listen

In most countries of the world, children are perceived as passive recipients of care and protection. Their capacities for participation in the life of the community are unrecognized and their agency is underestimated. Now this idea is being challenged. Like every one of us, each child is an expert in their own lives. Young children are skillful communicators who can share their views, needs, and experiences in many ways. The Reggio-Emilia pedagogist, Loris Malaguzzi, refers to children’s many ways of communicating as “100 languages of children.” Like the little ripples on the lake, they are all active agents who interact and influence the world around them, transforming and being transformed.

As one of those touched and transformed, they have taught me to listen to what they say. Listen with your ears, your eyes, your whole body. Listen to each child because each child brings their own perspective, their own family experiences, their own culture, their own body of knowledge that they will share with others in their own time and in their own way. The project “Salmon Speaks” reminds me to support those interests and to provide meaningful experiences for explorations and meaning-making. If you do, you will find yourself a part of every one of their adventures in learning about the world. As Zachary, one of the children enrolled in Valhalla Children's Center, reminds me every day, “you’re a kid, too, Natalie.” What an honour!

Natalie Lucas is Manager and Educator at Wee Ones Daycare & Preschool and Valhalla Children’s Center in British Columbia.

Education in Context: The Role of Place in Nature-Based Early Childhood Education

Nature-based education is, by definition, place-based education. And no matter where we are, when we enter into a classroom, we bring our place, and the history of that place, with us. Read More 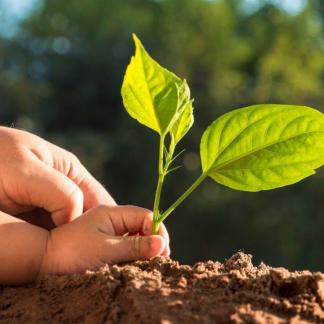 Learning to Care: The Promise of Experiential Learning in Nature for Young Children

Nature experiences can play a central role in children's moral development. But we need to start by modeling caring practices and sharing our own sense of wonder and responsibility for the natural world. Read More

Dream It, Plan It, Build It: How to Design an Outdoor Classroom

A Curious World: Exploring and Discovering through Books

Let Me Take Your Hand

Finding Great Nature Preschool Teachers: What to Look For During the Interview

Making the Most of Summertime

Nature Playdates: An Alternative for When Nature Preschool Isn’t an Option