Flow Learning in a Forest Kindergarten

When children arrive at Cedarsong Forest Kindergarten we greet them at a trail head on five private acres of native forest on Vashon Island, Washington. After we say our good byes to moms and dads, we head off to school in the forest. We don't have a building. There are no desks, no chairs, no chalkboards, and no books. The forest is our classroom.

In 2007, I developed Cedarsong Nature School’s Forest Kindergarten, the first of its kind in the U.S. based on the German "waldkindergarten" model. Besides its commitment to daily nature immersion, forest kindergartens are distinguished by several key features such as Reggio-inspired emergent curriculum, child-driven flow learning, and an inquiry-based teaching style. We know that young children learn best through hands-on discovery and when they are relaxed and having fun. The forest kindergarten early childhood education model keeps children excited about learning by building on their own discoveries and interests and increases their connection with the natural world.

In many U.S. preschools, outdoor time and authentic play are being replaced by an intense emphasis on learning letters and numbers in a very formal, structured, and teacher-directed manner. However, current research indicates that these early academic programs may actually be detrimental to a child’s later academic success. We have decided to take a different approach.

When the teachers arrive at Cedarsong’s Forest Kindergarten, they have no set agenda and no schedule for the children to follow for the day. The children’s play and interests guide their education. Children have an enormous capacity for taking in and cataloging information; but in my years of experience, I have found that the more children are interested in something, the more information they can take in and retain. Our approach capitalizes on following students' interests as they explore. This type of curriculum is referred to as "emergent" because it is evolves directly from what is relevant, interesting, and personally meaningful to the children.

Emergent curriculum, originally pioneered by the internationally renowned Reggio Emilia school, builds on itself as the class time unfolds. Emergent curriculum can benefit any environmental education program as it helps identify the learners' interests, and the learning strands that evolve from this approach can easily scaffold into more learning. Indoor activities can even be developed to build on what the group began learning during their unstructured flow time outside.

In order to make the learning that occurs through emergent curriculum visible, I keep a year-round, on-going journal of nature observations, the children’s play, their ideas, their discoveries, and the interesting conclusions they make. This creates a seasonal accounting of our activities and our observations on any given day, and allows us to compare what we were doing in the same season in previous years. In essence, it gives us insights into how our lessons and our play are determined by the weather and the season. It is amazing to notice that the children tend to gravitate towards the same activities during the same seasons year after year. Once a month, I compile all of these journal notes into a newsletter and send it out to the parents. It allows the parents to expand on the children’s learning at home, and it gives the parents a better sense of the value in this type of flow learning.

The following example illuminates the kind of learning that occurs in our child-driven program: One day at Cedarsong’s Forest Kindergarten, a four year old had the idea to experiment with throwing different natural items into our puddle to see which would sink or float. Before the children threw anything in the water, the teachers introduced the idea of making a hypothesis by asking, “Do you think that will sink or float?” and the children all gave their ideas. After some initial experimenting, the children came up with their conclusion: Big things sink, little things float.

However, as the teachers allowed time for the children’s further explorations, the children modified their conclusion. They began to notice that big sticks sometimes floated and little pebbles sank. With more experimentation, the children changed their conclusion and began to notice that weight, not size, was the determining factor of whether something floated or sank. This child-led “game” instantly became a fascinating science experiment where the children learned basic scientific principles. Now the children will often call out “Let’s play Sink or Float!” as it has become one of their favorite activities.

Many days at Forest Kindergarten the children spend large amounts of time digging in the soil. During these explorations, they make exciting discoveries by unearthing different colors of dirt, buried charcoal, or decomposing logs. In the inquiry-based teaching style of our Forest Kindergarten program, these observations become an opportunity for teachers to ask leading questions such as “How do you think this log got under the dirt?" Teachers’ questions have no wrong answers, and upon hearing each child’s answer, the teachers will respond: “That’s a good idea; what else could it be?” Gradually, through their own hands-on explorations and with questions designed to elicit conversation, the children begin to make conclusions about soil and how it is formed.

It is becoming more accepted here in America that there actually is great educational value in children’s play. Neuroscientists are discovering that the learning centers of children’s brains light up when children are engaged in play. There is also more understanding about the brain-body connection with young children. We now know that children incorporate new information best when they are moving as the learning is taking place. All of these new discoveries point out the inherent benefits of an outdoor classroom as an ideal learning environment for young children.

Slowing Down and Connecting with Nature

Young children’s lives today are often so structured; not only in their home life but also at preschool. They are continuously being rushed to do this or get ready for that. The forest kindergarten educational model allows these children the time to immerse in nature with no sense of rush and with no adults telling them what they must do next. The time slows as children find their own rhythm without adult intervention, and this sense of timelessness is something that is not often experienced in our frenetic world. I have found that today’s children want to engage in all the childhood activities that I engaged in as a child in the 1960’s, such as climbing, running, building, and decorating their secret forest huts. Yet it is rare for today’s children to experience this kind of free play in nature on a regular basis.

Most environmentalists cite two important factors in their childhood that led them to a passion for caring about the environment: extended unstructured time in nature and a mentor who taught them respect for nature. There is much concern that children today who are deprived of nature immersion experiences will lose that innate connection to nature which leads to compassion for the natural world.

The forest kindergarten is a great way to authentically connect children with nature. Its child-driven educational philosophy and resulting emergent curriculum creates a relaxing and fun environment that makes learning more meaningful.

Erin K. Kenny is internationally recognized as a leader in the Forest Kindergarten movement. Her work is featured in national media such as PEOPLE magazine, Sierra Club magazine, and American Forests magazine, as well as on national and international news programs such as ABC News Nightline and UK-Daybreak. Cedarsong Nature School recently published Erin's book Forest Kindergartens: The Cedarsong Way and produced a documentary DVD Into the Forest. 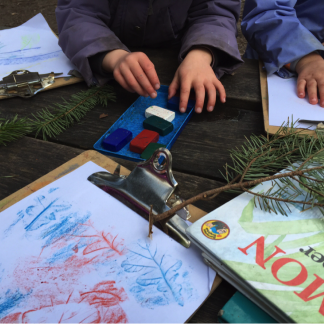 How do cultural ideas about childhood, development, and learning impact nature-based early childhood education? Samantha Leder shares some of the lessons she learned during her study abroad semester in a Danish forest kindergarten. Read More 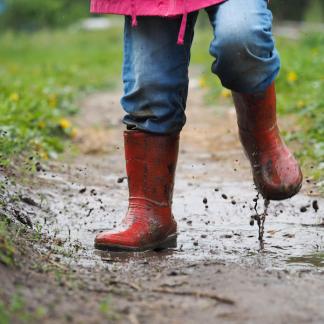 How Learning to Put on Rain Boots Leads to Academic Success

Learning to care for one's personal needs while playing outdoors is not always easy but it teaches children the skills they need to navigate new situations, think through problems, and develop strength and coordination -- the very foundations of later success in the classroom. Read More

Teaching in the Time of COVID

Rediscovering the Heart of Teaching During COVID-19

The New World of Nature-Based Education

Navigating the Implications of “Fit” for Children in Nature-Based Preschools

Licensing Outdoor & Nature-Based Preschools, In Washington State and Beyond